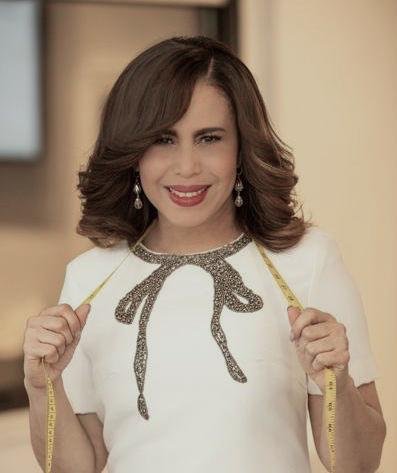 Cenia Paredes grew up in a family dedicated entirely to dress making in her native Dominican Republic.From an early age she helped her mother choose fabrics, participated in ﬁttings and sketched designs for her mother’s clients. By age 11, Cenia was fully immersed into the costume made dress business to help her family.

After immigrating to USA, Cenia graduated Summa cum Laude from the prestigious Fashion Institute of Technology in 2004. She then worked in New York’s competitive fashion district for various renowned brands, but always kept her dream of designing her own line as her ultimate goal. In 2009, Cenia launched her ﬁrst ready to wear collection Cenia New York®, a line of day into evening dresses with a revolutionary ﬁt concept that consisted in offering four distinctive ﬁts for that catered to the most predominant female body types, being the ﬁrst and only designer in fashion history to implement this concept and bring it to a major department store in USA.

Cenia caters to the woman who embraces her curves, is sassy, self secure and wants to look tastefully sexy and radiant no matter what size or body shape. In 2011, Cenia was chosen among 900 companies as one of the 22 participants of TheWorkshop At Macy’s, and she was one of 4 vendors chosen to launch her product in selected stores in the June’12. Since then Cenia has expanded her distribution to specialty stores globally and has expanded her line to include a highly successful denim line with her patent pending Cenia Convi Jean. In the Spring of 2016, Cenia’s debuted on Shopping Life 24 in Russia and HSN in the USA.