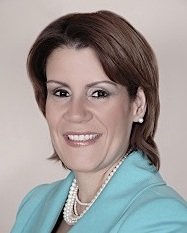 Wilda Diaz was re-elected as Mayor of the City of Perth Amboy for a third [four-year] term in November 2016. She was first sworn-in on July 1, 2008, becoming the first female to hold that office and currently the only elected Latina mayor of Puerto Rican descent in the State of New Jersey.

As she marks her 10 year anniversary in serving the City of Perth Amboy, she remains at the forefront of issues such as, expanding programs for our children, youth and families, maintaining an open and honest government, business expansion, economic development, job creation and preserving the City’s history. Furthermore as a recovery effort from the damage of Superstorm Sandy, over $17 million for renovations and storm mitigation were invested to create a state-of-the-art waterfront, which has received exceptional awards for design and completion.

Diaz, most notably has taken an unwavering stance to stabilize the City’s financial condition. She continues to combat inherited debt, she’s achieved an A+ bond rating upgrade and stabilized taxes for the past four consecutive years. Her administration’s Capital Improvement Program and several other cost cutting strategies, reduced the overall debt by over $50 million and saved a community from near bankruptcy within the first five years of being in office.

She has championed plans for the development and preservation of arts, history and culture by creating a city-wide arts plan, inclusive of mural projects and economic development features that advance the City’s strategic plan. Additionally, by establishing a Historic Preservation Commission and Green Initiatives, the city has seen vast improvements and attention towards both treasured structure and antiquated infrastructure. This includes her efforts placed towards two of the City’s most utilized historic structures, the Perth Amboy Free Public (Carnegie) Library, with nearly $2 million in capital improvements and the redesign plans and preservation of the Perth Amboy Train Station, while securing nearly $50 million in NJ Transit funds for future construction.

Diaz’s aggressive outreach and promotion of business advocacy has welcomed major corporations to Perth Amboy, such as Buckeye Partners and Target, the first distribution center in the State of New Jersey. Her administration has attracted over half a billion dollars in corporate investments in the past five years, while creating local jobs and beautifying and remediating over several hundred acres of industrial property that had been vacant for decades.

In December 2017, Mayor Diaz completed her 4-year term as the first Latina to serve as president and chair of the New Jersey Urban Mayors Association (NJUMA). Through her term, she was dedicated to working with state and federal lawmakers and officials to develop appropriate and effective public policy measures that impacts all New Jersey urban communities. She also has served on the League Management Reform Committee for the New Jersey League of Municipalities and currently serves as the Chairwoman for the Perth Amboy Redevelopment Agency (PARA).

Prior to taking office, Mayor Diaz spent 20 years in the banking industry where she started as a teller at a local bank after graduating from Perth Amboy High School in 1983. She quickly rose through the ranks and was an assistant vice-president with Banco Popular when she won the mayoral seat in May 2008 and as a result, resigned from that position.

A dedicated community activist, Mayor Diaz chaired the Board of Trustees for the Jewish Renaissance Medical Center, a nonprofit group that provides health care to underserved communities.

She was a driving force behind the Puerto Rican Patriotic Cultural Committee (Comité Cultural Patriótico Puertorriqueño de Perth Amboy), which sponsors the annual Hall Avenue Puerto Rican festival. Additionally, she served as a member of the Perth Amboy Merchants Association (PAMA) and has been honored by local organizations such as the Puerto Rican Association for Human Development (PRAHD) and the Jewish Renaissance Foundation (JFR) for her involvement in the community.

Diaz was inducted in the New Jersey League of Municipalities’ Hall of Fame for serving as Mayor of her community for 10 years. She also received the “Community Leaders of Distinction” award by the Middlesex County Regional Chamber of Commerce. At the end of 2015, NBC Latino and NBC Nightly News released a feature story Diaz, as the “First Woman Mayor of a Changing New Jersey Town.” Additionally, Mayor Diaz received the 2015 LatinoJustice “Latina Trailblazers” award for public service. In 2014, she was honored as “Community Leader” by the Hispanic American Law Enforcement Association and “Humanitarian of the Year” by The Coalition of Hispanic Physicians. Diaz was earlier recognized by El Diario La Prensa as “Mujeres Destacadas 2012” (Outstanding Women of 2012) and was featured in Real Simple Magazine as, “The Accidental Politician” among only four female mayors nation-wide. In 2012, Diaz was also inducted into the Perth Amboy High School Hall of Fame and several months later received the NJ State Association of Chiefs of Police “Professional Law Enforcement Leadership Award.”

Mayor Wilda Diaz is a life-long resident of Perth Amboy and a graduate of Perth Amboy High School. She and her husband Greg have two adult children, Gregory and Samantha.